Lessons from a Lapras

Posted on March 3, 2020 by DWHirschAuthor

This is the story of a Lapras, the fighter in all of us.

In June 2017, my husband and I were adjusting to life in our New Jersey house. One distraction was finding area Starbucks and other local coffee shops. Another distraction was learning our neighborhood by playing Pokémon GO driving between Pokestops and Gyms. During the Fire and Ice event in mid-June, I caught my holy grail Pokémon: a Lapras. 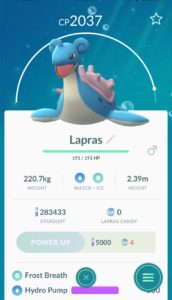 I saw them defending Gyms in Michigan, these intimidating water creatures that everyone seemed to have but me. I never found one in Michigan, but here in New Jersey, I caught a tiny one. Size didn’t matter; I always knew I’d find one, and here he was. The next day, Saturday, my husband went up the street to the Dunkin Donuts and caught me a second, higher-CP Lapras. No disrespect to my little Lapras, I powered up this larger Lapras to be bold and intimidating.

Imitating Michigan, I placed my beloved Lapras in New Jersey Gyms. He was kicked out of Gyms almost immediately. Over and over, Lapras returned home without bringing coins, and he developed a complex. He wasn’t tough enough, brave enough, strong enough to be useful. I looked up “Lapras” online and discovered that his breed is rather weak. I didn’t care. I had searched long and hard for one of him, and I loved him no matter what. I believed in him. We were going to figure this out.

Little Lapras became my walking buddy so we would earn candies to power up my big Lapras. We were all in this together. I told my Lapras that we could do this. My walking buddy earned candies, we powered up the big guy and my Lapras still got kicked out of Gyms.

One day, he fought hard and returned without coins from a Gym that was gold. Gold is a Gym badge earned when a trainer has enough overall Pokémon activity in that particular Gym thus earning bragging rights and receiving more items when spinning there. The Gym was not gold when Lapras went in. Now it was.

I continued placing Lapras in Gyms. He came back occasionally with a few coins, but never the daily maximum amount. One time he returned from another Gym that became gold while he was there. I noticed that. We discovered his talent: he earns gold Gym badges. 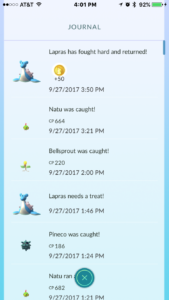 Throughout the summer, I became gold at other Gyms with other Pokémon. There were two locations I was close to: Old Kean and Ship on the Highway. Since school started at Kean University, competition at Old Kean on campus has been tough. Ship on the Highway has always been hit or miss for any Pokémon based on shopping traffic at the P.C. Richards store that looks like a battleship. That Gym has remained the highest in overall points of my non-gold Gyms, and I don’t know why. Now it’s #5 in my list. I told Lapras he was my Golden Boy, and he was going to get me that gold badge.

When the ship Gym was full, I placed Lapras in other Gyms. The first day he fought hard and returned with 50 coins, he strutted around and flapped his fins and puffed his chest out. He was so proud of himself, the jinx broken, the bad karma gone. I gave him a Max Revive that day and powered him up twice. He deserved it. I knew he could do it. Now he did, too.

On Monday, there was space in the Ship on the Highway Gym. Of course I placed my Lapras there, and drove off for the night. This morning, not 48 hours after that, I received the notification, “Lapras needs a treat.” 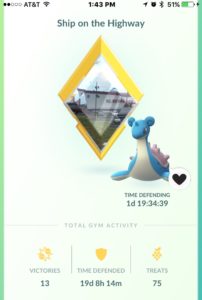 I decided to feed him remotely, and when I clicked on the Gym, it was no longer silver but gold. He did it again! I texted his accomplishment to my husband, who texted back, “Hap-Lapras!”

Just now, as I share our story, Lapras was the first of the Pokémon in Gyms who fought hard and returned today. He brought back the daily max coins. I powered him up in preparation for our next goal: gold at Old Kean.

Sometimes that is the same thing, and it needs to be you.

“You were born to win, but to be a winner, you must plan to win, prepare to win, and expect to win.”~Zig Ziglar, American author