Choose your own words in haiku and adventure

Posted on October 11, 2017 by DWHirschAuthor

“Only I can change my life; no one can do it for me.”~Carol Burnett, American actress

The video game Zork? is a simple game: type your actions. The puzzle in this text-only game is to figure out what commands will get you to the end of your journey and win. I was frustrated by Zork after day one. This is no video game; it’s a guessing game.

“Pick up sword,” I type.
“You cannot carry any more items.”

Beyond those statements, there are no other instructions. Like many players, I drew a map of the labyrinth forest I wandered around. I still got lost, and without knowing how or where I made the mistake, I was at a dead end just as my invisible character.

I wanted to love the game. I truly did. By the time I picked up this game, sometime around 1986, I was a video game junkie and an avid reader. This interactive fiction game combined both loves. The focus was on narrative, like creating your own story, but the context was so broad that without some baseline, I couldn’t get interested. Instructions were nonexistent. Was I asking the right question? Can I guess the proper question to ask? It was too much work for little reward. 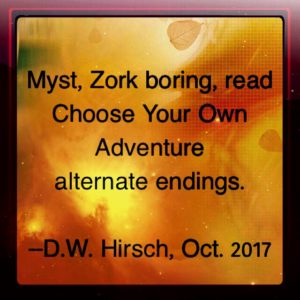 This week’s Haiku Horizons prompt reminds me of that storytelling. The Myst text adventure game from 1993 added graphics. By that time, I was over text-only adventures. I may have liked this better had it been the first game I played because I could see my choices. You have a visual grasp on your reality. There is a baseline, yet it’s a puzzle.

Choose Your Own Adventure books combines the fun of a maze and words with a puzzle and surprise. Each book guides you along pre-destined story paths, but at points in the narrative, the reader chooses what comes next. Sometimes you die. Sometimes you win. My first book was exhilarating, being in control of my story and yet not. Once I read through my chosen path, I went back and read every ending along the flowchart story.

At BEA 2016, I discovered the original books have been re-released along with new titles. Author Sylvia Hubbard created an online romance version of this form of storytelling. It’s making a comeback.

Combining words in wondrous and mysterious ways. I wonder if these books are part of the reason I became a writer.