Posted on November 21, 2016 by DWHirschAuthor

“Coffee is a language in itself.”~Jackie Chan, Chinese actor

I never used to be a coffee drinker, but now I am.

My parents gave me a sip of their black coffee to satisfy my curiosity, and I found it to be a mouthful of burning, bitter dirt.

Then I discovered sugar and cream. 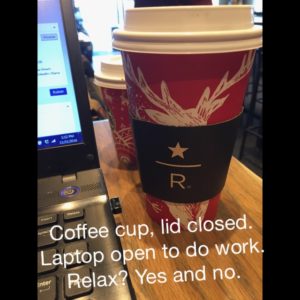 It was the Thing to be a coffee drinker on film sets. In my junior year at Penn State, I was the production assistant on a senior film, and the crew had early morning hours. I am not a morning person. Let me repeat that: I am not a morning person, then or now. Back then, I had to stay awake during filming, and everyone around me was drinking coffee. I should drink coffee, too, so I fit in and to keep me awake. Black coffee still smelled foul, but others were pouring stuff in it, sipping and smiling.

I followed their lead and added milk and sugar packets into my cup of coffee. That actually tasted good. Another cup, and then a third.

I should mention that I had added at least five packets of sugar to each cup. At least. Plus, I drank all three cups within two hours.

I felt the energy inject straight into my heart. I couldn’t stand still. I had to do something. The only thing I could think of was to walk. I climbed the building’s four flights of stairs. I walked the length of each floor’s hallway before descending to the next floor to do the same thing. After doing that one and a half times–or six stairs and hallways–I was calm enough to return to the film set.

Never again, I told myself. Of course, as I continued to work on film sets, the hours continued to be early and coffee was still the thing to do. Therefore, I drank coffee, but I discovered there were smaller-size styrofoam coffee cups and artificial sweeteners.

And then I discovered Frappuccinos. Now I was writing and journaling in coffee shops. Then I introduced my then-boyfriend-now-husband to Frappuccinos.

I gave up. I gave in. Coffee peer pressure.

Now it’s a social thing. Cool people hang out in coffeeshops. Cooler people hang out in coffeeshops and write. I discovered the vibe of local coffee shops and the consistency from chain coffee stores.  I’ve been schooled in different types of coffees, even how to pair black coffee with matching food to enhance the palate. I’ve been taught the proper ways in which to complain about my lack of coffee first thing in the morning.

It’s the place to meet with folks because there’s always some coffeeshop somewhere that is probably open until the late hours. Remember, I’m a night person. And I discovered decaf.