Belittled and empowered at #BEA16

I promise I will write about the positive things that came from BookExpo America and BookCon, but right now, I have to get a peeve off my chest, an moment that both belittled and empowered me in the same moment.

At the end of the day of BookCon–which was Day 4 for those of us who began with BEA on Wednesday–Penguin Random House was giving away its display books. My friend wanted some YA books, so I waited for her in the Penguin booth. One female who seemed high up on the employment ladder was telling her coworkers about an attendee who had insulted her. The attendee complained about the takeover of the Penguin publishing, saying she was glad not to be associated with that, or something like that; I came in at the end of the story. This representative said it was the only bad moment of the conference, adding, “Besides, it was a merger.”

I was standing next to them, and the woman turned to me. I don’t think she knew who I was because she complained to me.

“I remember when BEA was more professional. It used to be publishers and authors talking with agents and editors, before the (hands-in-the-air finger quotes) Bloggers (end quote) were a part of it. They were so grabby, taking all the books, pushing and shoving.”

“This is my first BEA,” I said, “and I thought there was more shoving here at BookCon.” BookCon is open to the public as well as industry professionals. I felt it was more about obtaining author autographs than networking. There were many younger people here, most without a sense of manners, and I was jostled and bumped and slammed into more today than all week. 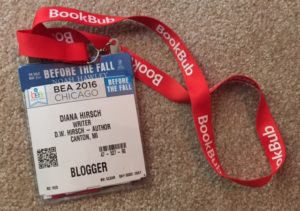 “Well, I didn’t see that. It’s good to see kids interested in reading,” she said, “but it used to be more professional. Now everyone feels so entitled.”

Yes, she used the word entitled. I was insulted.

I caught her eye and said, “I am one of those (finger quote) Bloggers (end finger quote), and I came here to network with others and get ideas and inspirations. Everyone I met was friendly, bloggers and authors and everyone.” Until this woman. Did my finger quotes even register on her?

She looked down at my badge and skipped over the text “Blogger.” Now, in almost every other interaction, people jumped on that title, and not just because it was a larger type. “Oh, what do you blog about?” they asked, interested, curious or hungry. Whatever the intention, I liked that attention. Here, now, those writing talents were snubbed.

“You’re an author. I’ve been in this industry for over 25 years. It’s good to see so many kids interested in reading,” she said, and then I tuned out to whatever she said next. The kids line now sounded like an excuse, and I realized why.

In the old days, she was a god.

Today, authors don’t need agents or publishing houses. We can do it on our own.

I looked for her badge to see her name because I would’ve call her out here, but her jean jacket and crossed arms covered that up. In those long-ago, more professional days, she was courted by hungry agents and desperate writers. Today she is irrelevant, thanks to the bloggers diluting the writing industry. She was dismissing my writing talents, and in that moment, I felt belittled because I was one of those just bloggers.

But she’s no longer the all and powerful. Now she is courting authors, asking them to sign a contract that snatches their story rights. As an author with three self-published books, I don’t need her. To me, she’s irrelevant.

Would I ever want to be published by a legacy, trade publishing company? Yes, I would. It would be cool to walk into a big box book store and hold my book in my hands. It would be great to know that my friend in Arizona is able to pick up my book in the moment and take it home with her. But that accomplishment–so to speak–is a novelty. I wouldn’t sign away my hard work for the presumed prestige of being on a bookstore shelf. I own my own group of ISBNs, and I can print or not print my books as I choose.

That’s the key: I have a choice. I have power.

Like Loading...
This entry was posted in Writing and tagged blogging, books, eBook, writing. Bookmark the permalink.