“The true sign of intelligence is not knowledge but imagination.”~Albert Einstein, German scientist

I now understand why beta readers are so important to writers.

Since I moved to Michigan, I have relied on my Deadwood Writers Group for input and feedback on my memoir. The members have been fabulous at making me think of my story elements in a different way. They point out inconsistencies; I rearrange my sections. Do I have a meandering Info Dump? I tighten my text. Too many pronouns? I revise. Dude, these folks are it. I didn’t need anyone else. These people rocked it.

And then I had someone else read a segment of my memoir. That changed everything.

Not literally everything, but what a spinning perspective. My Writers Group has lived this memoir for years. Long-time members know the story, approach and my overall goals, so I’m sure they base feedback off that. They’re familiar and comfortable. The author who reviewed the exact same chapter had an outsider’s outlook with no bias. 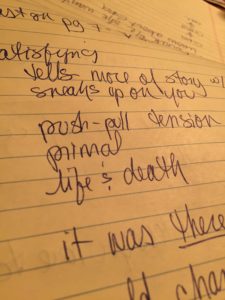 My notes from the critique. Insightful.

She co-hosts a bimonthly writer workshop in Ann Arbor. On the first Thursday, there is a topic presentation, and on the third Thursday, there is a networking meeting with the opportunity to have five pages of your work in progress critiqued by the co-hosts. I was curious about feedback, so I brought the same five pages that Deadwood writers group reviewed last night.

One area I asked for feedback on is the book’s opening introduction and the two ideas I have for that. The first option is fast-paced and a scattered. There is internal dialogue as the main character runs into the hospital after hearing potential bad news. The intention is to wow the reader with action and emotion. It packs a punch, and some people enjoy the rush. I like the breathless way it opens. The second option is slower with dialogue between the main character and minor players. This opening offers insight and reflection about the main character’s perspective and opinion of a priest who is rushing to do a Last Rites sacrament. It provides a base to establish the situation: tense, questioning and page-turning.

This author immediately said the second, slower one was best. She gained sympathy for the character, and found humor in the reaction to the priest. You see a lot of beliefs and perspectives in the main character, and it’s a strong base to continue in the story.

“What about the other opening?” I asked. “What are your thoughts on that? Why don’t you prefer that?”

“The end is already determined,” she said.

Oh. There is little drama despite the action. As written, the slower beginning has hope and possibility while the energetic one is almost running to the story’s inevitable end.

I never thought of that.

My writers group couldn’t offer that unbiased perspective because they’re years entrenched in my story. They know the beginning, middle and most of the end. This woman did not.

She went on to talk about the transitions. My memoir is a collection of related but not necessarily chronological events that relate to one theme or lesson. The two events that open the first chapter–Lesson One: Get Out–need to be there to establish background, but this author suggested a different order.

“After the first section, the mugging and the grandmother’s reaction to it, I want to know about this ‘tough old broad.’ You jump into this bus riding part. Why is riding a bus so dislikable? Is it a class thing? It’s distracting and slows the story. I want to immediately follow the likable grandmother character, which is strong compared to the bus part.”

I never considered rearranging the two, but I never saw it from the perspective that readers might connect with the grandmother and then feel distanced or cheated by not immediately knowing more about her.

Those two points of critique, as well as the other comments she offered, give me a different way to approach this story. Not just the first chapter but in looking at the characters and the flow of events. Maybe I introduce a character and follow him/her around before transitioning to another character scene or event. I can even make those transitions more active by considering the perspectives they open with.

I could never have gotten this input from my writers group, not even with the newer members. Any critique they could offer could be tainted with comments by the longer time members.

I will never give up my treasured writers group, people who are deliciously ruthless and challenging to me and my writing. They know my story, so they can offer suggestions to help me reach my intended goal. The attachment these people have with my characters, love or hate, is valuable. It is not a detriment. However, I can’t rely on them entirely, I shouldn’t if I want my story to be the best it can be. Getting an untainted perspective along the way is just as worthwhile. When authors talk about needing beta readers, I understand now why there’s value to that. I am fortunate to have a strong critique group, and I now know that an outside opinion and perspective is just as useful in a different way.

Like Loading...
This entry was posted in Writing and tagged DadMemoir, Deadwood Writers, family, memoir, writing. Bookmark the permalink.